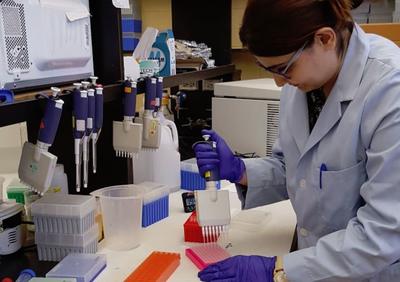 Safia Janjua is an Environmental Sciences PhD candidate at Wright State, and a Panthera Sabin Snow Leopard Grant Program recipient. Panthera’s Snow Leopard Program currently leads or supports conservation activities in five of the 12 snow leopard range countries, including China, India, Kyrgyzstan, Pakistan, and Tajikistan. Their program is rapidly expanding conservation efforts in China, where more than half of all wild snow leopards are thought to exist.

Janjua shared her amazing journey in snow leopard conservation with Panthera's blog titled Fields Notes, which is reprinted here with permission from Panthera; a global wild cat conservation organization. The images we have shared along with the content are Janjua's. We are pleased to be able to share her post.

My snow leopard research journey began in a very unlikely place: studying fish genes with Pakistan’s Bioresource Research Centre (BRC) at the start of my career.

I had a background in biochemistry and wanted to pursue cancer research and drug development, so it was hard to digest the rationale behind my assignment to study the genetic diversity of fish. The only interest I had in fish was ordering it fried or grilled. I never imagined that the charisma of animals I discovered through this work would capture me for the rest of my career.

My time with the BRC taught me the basics of conservation genetics and instilled in me a desire to better understand the animals with which we share our environment. The BRC is home to a bear sanctuary that houses almost 40 individuals, all confiscated by people who were keeping them as illegal pets. I used to watch the bears for hours, the deep empathy I felt for them ultimately leading me to pursue a career in wildlife conservation. Though I have admired snow leopards since encountering them in David Attenborough’s famous documentary, it was through meeting Panthera’s Snow Leopard Program Director Tom McCarthy that I discovered how my research interests could benefit this charismatic species. After approval and encouragement from my supervisor at the BRC, I geared up for snow leopard research.

My first idea was to apply next generation sequencing (NGS), a method of quickly sequencing DNA, to snow leopards. Equipped with only motivation and a basic understanding of this emerging technique, I applied for Panthera’s Sabin Snow Leopard Grant in 2016. Meanwhile, I was accepted to the Ph.D. program in environmental sciences at Wright State University, and I moved from Pakistan to America to make my dream of studying snow leopards a reality.

Although my family moved with me, my mother took some convincing when I told her I was pursuing conservation studies—a field not yet fully valued where I come from. She says a degree in biochemistry would make me more lucrative, but I hold out hope that one day she will recognize the importance of my work. My 3-year-old daughter, on the other hand, is very engaged with conservation. I am always proud when she makes the choice to forgo a straw to help save marine life or adds snow leopards to the list of cold-adapted animals discussed in science class. I am happy to see the change of views between generations.

For my research, I’ve collaborated with my advisors Tom Rooney and Jeff Peters—and generated far more promising results than I expected, allowing me to truly appreciate the power of NGS-based techniques. Previous methods required high-quality DNA difficult to obtain with our non-invasive sampling procedures and only yielded results from a small fraction of samples. In contrast, NGS provides data from 100% of samples (usually scats) and even allows us to process samples collected five to 10 years ago!

My research aims to use these techniques to reveal the genetic health of snow leopards in Pakistan, shedding light on problems like inbreeding. Like when human relatives reproduce, when genetically similar snow leopards mate, it can cause a host of genetic maladies. As with most conservation woes, humans exacerbate this problem. One of the most surefire ways to encourage genetic weakness is to introduce barriers between populations. When people fragment snow leopard habitat by introducing roads and other disturbances, it prevents unrelated snow leopards from breeding and mixing up the gene pool. Unfortunately, populations resulting from such circumstances are more susceptible to environmental stressors like disease.

As part of my Ph.D., I aim to discover the degree to which this problem exists for snow leopards in my study area. This work has the potential to be groundbreaking, as, to date, there are no published studies on the genetic diversity of Pakistan’s snow leopards. Even basic information about snow leopard population numbers is lacking here; due to the difficulty of collecting authentic data, the current estimates are incredibly variable.

If we discover high levels of inbreeding, researchers can begin to understand why, and introduce appropriate mitigation techniques—like wildlife corridors—that allow previously separated populations to reach each other. I am hopeful that implementing such informed conservation and management plans will create a brighter future for snow leopards. We may be pioneering NGS conservation techniques with Pakistan’s snow leopards, but it’s the first step to unlocking the cats’ genetic secrets across their range.