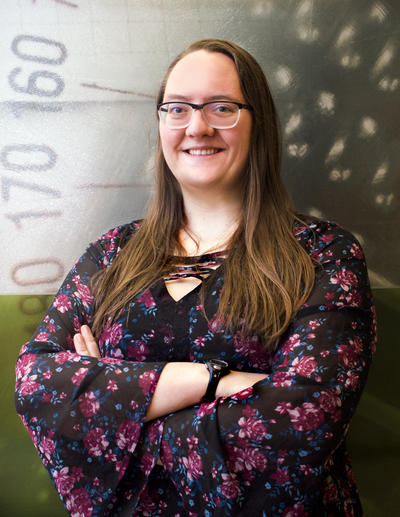 Dorothy Lucille Ayres, grew-up in Oakwood and was attracted to Wright State because of the university's excellent psychology program, specifically in Human Factors psychology.  She said, "psychology has intrigued me ever since I was around twelve or thirteen, when I was introduced to the concept of personality psychology. I loved the idea of using science to learn more about how people work, and eventually how to use science to improve people’s lives through that knowledge".

She expected college to be scarier than it actually was.The idea of being mostly on her own, learning how to do things on her own time and with her own motivation was intimidating. She commented, "academically I took off right away, but socially it took me some time to get my feet under me and find the kind of people I want to hang out with".

Dorothy was admitted to Wright State as a University Honor's student. She completed an undergraduate research experience in social/health psychology, supervised by Tamera Schneider, PhD in 2015 and entered the Department of Psychology Honor's Program in the Spring of 2016. She completed her psychology honors project under the supervision of Scott Watamaniuk, PhD 2017-2018.

One of Dorothy's favorite classes was her engineering psychology class, as it is in line with her human factors interests along with some artistic electives. The psychology program requires students to complete a certain number of credit hours from outside of CoSM allowing her to explore other interests. Dorothy took a film photography course and participated in women’s choir since her second semester at Wright State. She commented, "I’m very happy that I was able to pursue some of my artistic interests while completing my degree".

When asked about being nominated as the Department of Psychology's Top Scholar she said her reaction was surprised because of the number of dedicated students in her program. "I would say that it’s an honor to be recognized, and I appreciate knowing that people have seen the work I’ve done and think it’s good enough to be worth recognizing".

She recommends that future students seek out and get involved in lab and research experiences early. "It’s never too early to start. Narrowing down the types of things you’re interested in is important, as is gaining experience for how research works in your field. Also, graduate programs love to see previous research experience on an application". She also suggests trying different things to figure out what you like doing. "Make connections with your professors, I promise they aren’t as scary as you think they are. Try to do something outside your own field, something you find fun, whether it’s a class or a club or an extracurricular activity".

Dorothy intends to pursue a career in Human Factors (HF), specifically focusing on the design of tools and processes. She commented, "ultimately I would like to work in an HF design field, possibly in interface design since that’s a hot topic these days, but there are a lot of directions you can take HF in and I’m still exploring my options". Dorothy has applied to several PhD programs in Human Factors Psychology and looks forward to receiving and reviewing many offers.