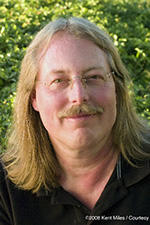 Chris Johnson ('82), University of Utah, has been awarded the 2010 Visualization Career Award by IEEE VGTC in recognition of technical achievements and leadership in Scientific Visualization.

Dr. Johnson earned his BS in Physics from WSU in 1982 and Ph.D. from the University of Utah in 1989. He is a Distinguished Professor of Computer Science and holds faculty appointments in the Departments of Physics and Bioengineering. In addition, he Co-Directs the NIH Center for Integrative Biomedical Computing and the DOE Visualization and Analytics Center for Enabling Technology. Dr. Johnson founded the Scientific Computing and Imaging (SCI) research group at the University of Utah in 1992, which has since grown to become the SCI Institute. SCI is recognized as an international research leader in the areas of visualization, image analysis, and scientific computing, employing over 170 faculty, staff and students. For his distinguished contributions to scientific visualization and scientific computing, he was elected a Fellow of the Society of Industrial and Applied Mathematics in 2009 and a Fellow of the American Association for the Advancement of Science in 2005. For his research and leadership in biomedical computing, he was elected a Fellow of the American Institute for Medical and Biological Engineering in 2004. Professor Johnson has received numerous awards including a Young Investigator's Award from the NIH in 1992, the NSF NYI Award in 1994, and the NSF Presidential Faculty Fellow award from President Clinton in 1995. In 1996, he received a DOE Computational Science Award, and in 1997 he received both the Par Excellence Award and the Presidential Teaching Scholar Award from the University of Utah. In 1999, Professor Johnson was awarded the Governor's Medal for Science and Technology. In 2003 he received the Distinguished Professor Award from the University of Utah, and in 2009 he received the Utah Cyberpioneer Award. In 2010, Professor Johnson received the Rosenblatt Prize for Excellence, the University of Utah's most prestigious award.